Crickets! A Tasty and Potentially More Sustainable Way to Meet Our Protein Needs

One of my favorite things in life is to try new and “exotic” food items, be it weird fruits from when I visited the jungle or grilled beef heart, or homemade head cheese (I did this once and will have to post about it soon) or pasta sauce made from mealworms, if it’s novel and intriguing, I’m going to eat it.

That said, the things that get me really enthused usually satisfy the following criteria:

#1 Is it nutrient dense? As in is this going to give my body a net benefit due to its content of macro/micronutrients, trace elements, polyphenols etc

#2 Is it delicious? Not always a requirement as I will eat and drink things that aren’t the tastiest if I know that they’re good for me. Case and point, munching on dandelion greens or garlic mustard straight from the earth or forcing myself to develop a taste for liver when I discovered how much nutrition it packs per serving.

#3 Is it good for the environment/sustainable? This one is becoming increasingly important as I look around and observe the insane rate at which our current culure is destorying the planet in the names of convenience and commerce. Examples such as organic banana farming, CAFO/feedlot animal farming, GMO soy, corn and canola farming to name a few.

So when something new comes into my awareness and checks off all three of these criteria then you can be certain I’m a fan and the current trend of farming and eating Crickets what I want to talk about today. 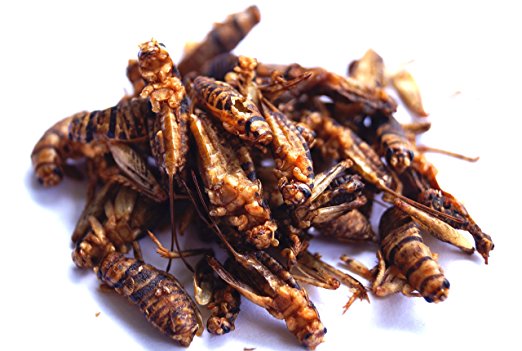 Now before you go on getting grossed out and turn up your nose at this delectable insect, consider the following,

They are also touted to have 2x the beef per gram as beef, 1.6x more calcium than milk, and 2x more iron than spinach. (from naakbar.com)

I think of them as land-based shrimp and find that if you can simply keep your mind open and try some that have been well prepared that you’ll find them to be a tasty, crunchy snack.

The protein is also of good quality containing all essential amino acids so there’s no need to combine with other complementary sources as one would have to do with many of the vegan/vegetarian proteins.

The trend towards cricket’s and other insects as food has been going on for a while and there are now at least 4 companies with which I’m familiar. I first was introduced to them back in 2015, I think through Tim Ferriss in the form of an Exo protein bar which was rather tasty, although, for what you get and given my tight budget at the time, these were a bit pricey for my Canadian blood, especially since they were only coming out of the U.S. and would be subject to shipping and duty on top of the retail price. In these bars, they use cricket flour/powder so that you can’t even tell that they’re made of insects and instead you simply get what is typically a higher quality, Real Food based energy/protein bar.

In terms of the Macro/micronutrients (Link to a 2015 food lab test), within 100 grams of cricket powder, we get approximately:

We also get decent amounts of potassium, Iron, B-12 and Calcium which most of us can certainly benefit from having more of.

Fast forward to 2017 and there are some new players in the game, one in particular, I had the privilege to two whole product lines after meeting their teams at CHFA East in September.

The first company is called Crickstart and makes not only bars with cricket powder but also crackers and smoothie powders as well.

I had the founder on a podcast titled Rethinking Food and Sustainable Nourishment with Daniel Novak that was a very informative and fun conversation.

The second is called NAAK and describes themselves as “a leading maker of insect-based food that helps athletes perform better and lead healthy lifestyles. We are athletes with a passion for outdoor sports and for making nutritious food that is good for people and good for the environment.” (Facebook)

I reached out to them after the show and they were kind enough to send me a sampler pack of their three flavours, Coco Macadamia, Choco Orange and Choco Banana. The ingredients are pretty much as clean as you’ll find in the protein bar space with a base of Dates, Cricket Powder, Apple Juice, Cocoa Powder, Sunflower Butter, Maple Syrup, Chia Seeds and Sea salt with slight changes for the different flavours be it coconut and macadamia nuts, orange oil or natural banana flavour.

For my day to day or if I’m in a period of less intense exercise they are a bit high in carbs which come from the dates (that have added dextrose) and the apple juice (which is from concentrate) plus maple syrup, however, this does impart a delicious sweetness, and given that they explicitly market towards outdoor enthusiasts and endurance athletes it makes sense that they’d include a carb to protein ratio of 3:1.

Personally, I practice and preach more of a low carb high fat keto adapted approach to exercise and life but most people and athletes still follow a carb based fueling strategy which is cool if that’s your thing. From a performance point of view it might work better for you, especially if you’ve never keto-adapted, but from a longevity standpoint, I prefer to play in mild ketosis, which is still possible depending on your metabolic flexibility, pre-event fueling, and level of activity when eating one of these bars.

In addition to the above points, I like that they’ve got a higher calorie count than some bars and they’ve got a nice amount of electrolytes, mainly potassium, sodium, and magnesium with a bit of Calcium. They even have 25% of the RDA for Iron which is roughly 5 mg for an adult male here in Canada and because it’s coming from an insect source I imagine it would be easier to digest and assimilate than iron from a plant source but that’s just a guess and I don’t know if insects have heme form iron or not.

The team at NAAK must have a more iron dense cricket powder then the sample I found above or it’s coming from a combo of the other ingredients, either way, they’ve got a nice nutrient density with relatively few ingredients, again, this is a good sign of quality in my books.

I really enjoyed the taste and texture of the bars with Coco Macadamia being my favorite. They hold together very well when traveling and aren’t overly chewy, dangerously hard, and don’t get stuck in your teeth like some other bars I’ve tried.

Unfortunately, I haven’t been able to enjoy them in their intended context because shortly after receiving the bars I tore the meniscus in my right knee which has kept me from doing much in terms of intense training or endurance activities.

That said, as I heal and find different ways to exercise I look forward to seeing how they make me feel as a pre / post-exercise snack.

The only real knock I have on these in terms of ingredients is the added sugars in the dates and the concentrated apple juice, that said, I understand the difficulty trying to balance the best ingredients with cost and flavour and texture so I can’t fault them much on the products they are delivering, especially given their target market and positioning in the industry which is very carb friendly.

Overall, if you’re looking for a cleaner alternative to the whey and milk based protein bars, want to try something other than brown rice, hemp, or pea protein from the vegan options, aren’t afraid of some sugar, and want to support a Canadian startup that is contributing to the ever growing industry of sustainably sourced insect protein, then give these guys a shot.

They sell a 3 bar discovery pack that’s got each flavour, or if you’re like me you’d do best just getting an entire case of coco macadamia, now called Go Nuts, because that’ll likely be your favorite anyhow. And a little bonus for ya, as of this writing, they’ve got a “GONUTS” coupon code that’ll knock 20% off your order.

Regardless of your food preference or dietary leanings, I think this trend is a good one to get us all thinking about the kinds of foods we used to eat as hunter-gatherers and to recognize how much delicious variety nature provides.

It’s my hope that by opening our minds and expanding our tastes we can reconnect in some small way to our inner wildness and ancestral heritage.

Be well and stay healthy!